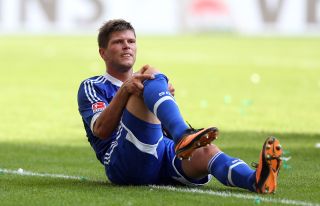 The Netherlands international has been out of action since damaging knee ligaments in the 4-0 setback at Wolfsburg in August.

Huntelaar had returned to training but suffered a further setback in training on Monday, with the club releasing a statement saying the 30-year-old could require an operation to resolve the issue.

But Keller said the former Real Madrid and Milan striker will not feature for the Bundesliga outfit again in 2013 regardless of what decision is taken.

"It doesn't really matter what the decision is on Klaas Jan Huntelaar," he said.

"He can't play until Christmas. It doesn't matter if he decides to have an operation.

"He might recover without one. Both outcomes are possible. The decision has not been made yet.

"We didn't rush him back before he got injured. Usually an injury like his is fine after eight weeks. He felt good.

"He took part in everything and this setback was an accident. He collided with someone in a bad position. This would still have happened even if it was two weeks later."

Schalke - who sit eighth in the table - continue their campaign with a trip to Eintracht Braunschweig on Saturday.

And Keller could be without Kevin-Prince Boateng who was injured during their 4-1 win over Augsburg earlier this month due to a problem with his left knee.

He added: "Timo Hildebrand is doubtful, he is suffering from back pain. Jones is questionable.

"We will also have to see about Boateng. The healing process is going well, but we have to wait to see if he is ready for Braunschweig yet. We will wait to make the decision."