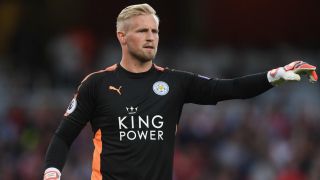 Kasper Schmeichel and Tom Ince are set to face off in the Premier League as Huddersfield Town host Leicester City.

It is far from the first time the Leicester goalkeeper and Huddersfield forward have gone head to head, however. In fact it is the continuation of a rivalry that goes back to their childhood.

Schmeichel and Ince went one-on-one as children in the Old Trafford tunnel when fathers Peter Schmeichel and Paul Ince were at Manchester United.

Donning his Dad's United kit, Schmeichel demonstrated his clear goalkeeping prowess but, as you can see, the infant Ince was very pleased with his attempt on goal.