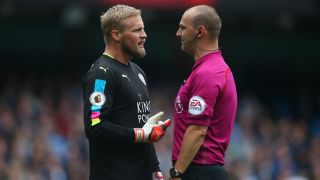 Leicester City goalkeeper Kasper Schmeichel slammed the decision to allow David Silva's goal to stand in his side's 2-1 loss to Manchester City and questioned the consistency of referees.

Silva opened the scoring on Saturday with a scuffed shot that bounced into the bottom corner, with Gabriel Jesus netting the second from the penalty spot before Shinji Okazaki scored a consolation.

Leicester protested vehemently against the opening goal after Raheem Sterling swung a foot at the ball as it went in, with the England winger standing in an offside position as he did so.

Sterling claimed afterwards that he intentionally avoided making contact but Schmeichel insists he was interfering with play by blocking his line of sight and stopping defender Christian Fuchs from making a block.

"The first goal is offside," the goalkeeper told Sky Sports. "Anybody who's played football – especially in goal – will know he's offside.

"It's one of those debates that as players we'd love to get involved in but we're not allowed to so that's what makes it very frustrating as they aren't willing to listen.

"If he's in the six-yard box, the ball is going by him, it's going past my line of sight. That means he's interfering. It doesn't matter if he's going for the ball because I can't see it. Christian Fuchs can't get to the ball because he's stood in the way of him, preventing from swinging his foot at the ball.

"He's gone for the ball so it's a very frustrating decision because three times he's offside."

Leicester battled to get back into the match and thought they had equalised in the second half through a Riyad Mahrez penalty, only for the goal to be disallowed and a free-kick awarded to City because the Algerian kicked the ball against his standing foot as he scored.

A similar incident occurred in the Champions League semi-final second leg between Atletico Madrid and Real Madrid, although Antoine Griezmann's goal was allowed to stand in that instance.

Schmeichel placed no blame on Mahrez but lamented the lack of consistency from referees and the inability for players to make their voices heard in the debate around rules.

"What happened with Mahrez is a freak incident," he said. "You know we saw it with Griezmann in the semi-final and it stood, so you talk about consistency – it's very difficult to take!

"No one asks the players' opinions. They tell us the rules but they won't listen to us. It's a frustrating thing to talk about because we can't get involved in the debate.

"It's a strange feeling today because we can be proud of our attitude. After the goal and before we were very disciplined, gave everything, and should have got something out of the game.

"I knew something wasn't right from the spin of the ball [at the penalty], but that wasn't given in the Champions League, so you never know with the consistency."