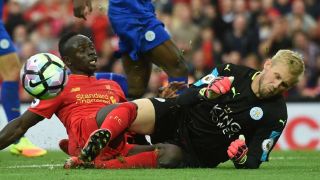 Kasper Schmeichel says Leicester City must dust themselves down after being humbled by Liverpool at the weekend as they prepare for the start of their Champions League adventure.

The Premier League champions were put to the sword 4-1 by a slick Liverpool performance at Anfield on Sunday, despite being gifted a way back into the match by a Lucas Leiva gaffe shortly before half-time.

Claudio Ranieri's men have little time to dwell on the disappointing results as the Foxes travel to Club Brugge for their Champions League group stage opener on Wednesday.

Goalkeeper Schmeichel praised Liverpool for their strong performance, but urged Leicester to prove their mettle when they make their debut in Europe's elite competition.

"We didn't quite hit the standards that we know we can and they [Liverpool] punished us," he told the club's official website. "They're a good side. They're very fluid and it's difficult to track the runners all the time.

"You've got to give credit to Liverpool. They played well. We weren't at our best, but a lot of credit goes to Liverpool because they were very expansive.

"They've got pace to burn on the wings and they cut inside a lot, so it's very difficult to defend against.

"It was a tough night, but the old cliche is to dust ourselves down. We have to get our heads on on Wednesday."