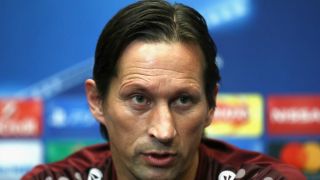 Bayer Leverkusen boss Roger Schmidt insists his side were good value for their hard-fought, 1-0 Champions League win over Tottenham at Wembley.

Kevin Kampl rifled home what proved to be the winner from close range after 65 minutes as the visitors leapfrogged their opponents into second place in Group E.

The result snapped a run of five consecutive Champions League draws for the German side which dated back to last season's competition.

"We played full of courage and determination," he said. "I am happy we won here. We knew Spurs would get chances, but we stayed stable. It was hard work and a hard fight. We simply deserve this.

"This was a special game, playing against Tottenham at Wembley, it was an exceptional situation and we enjoyed the fact that we played football and fought well. Our team showed that we were very much together and worked well for each other.

"Tottenham are unbeaten in the Premier League and that makes it even more special."

Schmidt went on to admit that his side may have benefitted from the game being played at Wembley rather than White Hart Lane and predicted that the race to qualify for the knockout stages from Group E would go right to the wire.

He said: "Perhaps it was a slight advantage to play here because it's not their ground, but [the] atmosphere was very good here. But that was dampened early on by our pressing.

"The situation in the group is in our own hands and that was our target before the match; our minimum aim was to take one point but winning puts us in a good position. It'll go down to [the] last match day. We're in a good position, but from the start I've believed we could be in [the] top two."

Leverkusen will travel to bottom-placed CSKA Moscow for their next Group E fixture on November 22.