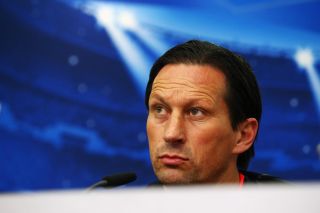 Schmidt's men have made a relatively positive start to his time in charge, losing just once in the Bundesliga to occupy sixth place currently.

However, Leverkusen threw away a three-goal lead against Stuttgart at the Mercedes-Benz Arena on Saturday - Timo Werner, Florian Klein and Martin Harnik scoring in the second half as Schmidt's side drew for a third consecutive league game.

Following the disappointment of dropping points on Saturday, Schmidt wants to see an improved showing against Zenit on Wednesday at the BayArena, after defeat to Monaco and a win over Benfica so far in Group C.

"We are pleased that we can play again after such a game like Saturday against Stuttgart," Schmidt said on Tuesday.

"We have the opportunity to present ourselves differently. Zenit is a strong team and for us this is a big task. If we play like in the last Champions League game [against Benfica] we have a good chance to win the game.

"We have analysed the [Stuttgart] game and must draw the right knowledge. I think it is possible to draw a lot.

"I think basically we are very difficult to play against but if we are negligent, we lose our strength. This was seen against Stuttgart. We are still early in our development but we must learn from the Stuttgart game."

Following injury problems, Lars Bender could return for Leverkusen on Wednesday, which would allow Schmidt to push Hakan Calhanoglu further forward - having been deployed in central midfield against Stuttgart.

Schmidt feels it is key to be able to play the former Hamburg man in a more advanced role against Zenit.

"He was very disappointed on Saturday. He did his job very well against Stuttgart and was at the service of the team," Schmidt continued.

"We hope that we can use Hakan in his position, so it is also very important that Lars Bender can play."