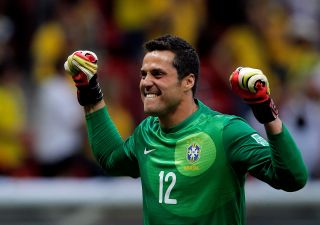 The 33-year-old goalkeeper played for Queens Park Rangers last season, but has been linked with a move away after the club were relegated from the Premier League.

Napoli and Fiorentina are both reported to have shown an interest in taking the former Inter keeper back to Serie A, with Arsenal also rumoured to be keen to sign him.

However, a switch has yet to materialise and Scolari has warned Cesar that he needs to be playing regular football if he wants to remain first choice for his country ahead of next year's FIFA World Cup.

"It is a situation which is worrying me and Julio is aware of that,” the Brazil coach said ahead of their friendly fixture with Switzerland in Basel on Wednesday. "It doesn’t matter whether he plays for a club in the third, fifth or tenth division - that he plays is the important thing.

"Anyone who wants to stay here with me needs to think about the national team and not just the money."

Cesar has won 74 caps for Brazil since making his international debut in 2003.