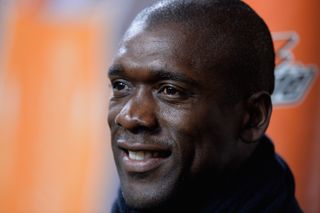 Seedorf's side trailed with three minutes to play on Sunday, after Marco Sau opened the scoring in the 28th minute for the losers.

But Mario Balotelli's free-kick gave Milan a lifeline and Giampaolo Pazzini scored the winner with one minute remaining.

The win marked the first time that Milan had secured back-to-back Serie A wins all season, and new boss Seedorf was delighted.

"I am very, very happy for the lads, as it was important for more morale to get a victory this way," Seedorf told Sky Sport Italia.

"We should've scored at least once in the first half and being behind brought out our team spirit. The spirit is the base for everything else.

"Balotelli did very well helping out in defence and everyone fought hard. They all tried to do what we prepared in training and then we created a great deal in attack.

"It wasn't always pretty, but with such a strong wind factor in the stadium it wasn't easy.

"We held on until the end and maintained our belief, which really pleases me and is important for the next games."

Seedorf retired from professional football earlier this month to take up the Milan job, his first as a coach.

Under his tutelage, Milan have won two of their three matches, with Sunday's win taking them into the top half of the table.