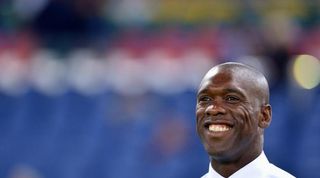 The 77-year-old is currently serving community service in a care home, and was reported by Telelombardia to have claimed some of the residents could do Seedorf's job at San Siro.

Despite a fine recent run which has seen them take 18 of the last 21 points available - beating local rivals Inter in the process - Seedorf's long-term future as Milan boss is thought to be under threat.

But Seedorf refused to comment on Berlusconi's barb, instead concentrating on Sunday's league clash with Atalanta as Milan chase a spot in the UEFA Europa League.

"I have nothing to say about what Berlusconi has been reported saying," he said.

"My focus is on the match. It's gratifying when the players support you in public and I've always spoken well of this group. We’re all pulling in the same direction.

"Myself and the players know each other better now.

"The derby is always a special match and it was great to see their joy and the applause from the fans. These are all things that will increase the affinity between me and the players.

"We can only focus on our own game and not Torino-Parma and I won't talk about president Berlusconi."