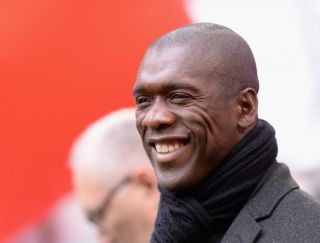 Seedorf replaced Massimiliano Allegri as head coach in January and, after a somewhat indifferent start, the Serie A giants have finally started to show signs of improvement under the Dutchman.

By Milan's standards, the 2013-14 campaign has been largely forgettable, and they currently sit seventh some 39 points adrift of leaders Juventus.

Yet, there may be a small beacon of success come the end of the season as five straight league victories has propelled Milan to seventh and back into contention for a UEFA Europa League spot.

And Seedorf believes the plaudits belong to the team for their work in reversing the club's fortunes.

"The credit goes to the group," Seedorf said ahead of Friday's visit to Roma. "From the very first day they showed they wanted to come through the bad situation.

"They have done well in the league. Even when we went out of the Champions League, the team worked with conviction and it was just a question of time.

"We are still not where we want to be, we still want to improve and do the best we can.

"We work as a team. Everyone has given something to allow us to have this good period. For me it's a question of the team."

Milan's run is sure to be tested against a Roma side who still harbour slim hopes of lifting the Serie A title, following eight straight victories.

And Seedorf was quick to compliment the work done by Rudi Garcia at Stadio Olimpico.

He added: "I have great respect for Roma and for the work Garcia has done. The focus of all the big teams is to impose their own game and ideas.

"It will be tough to stop them as individuals. We need to put in a great performance as a team. Roma versus Milan is always a good match to watch, there are targets for both teams to aim for.

"It will be a hard-fought match and we will need to play well, as we have done on many occasions. We'll be playing against a very good team in great shape who have conceded less goals than anyone else.

"I can only compliment them."