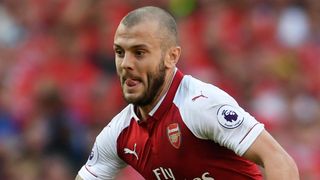 Arsenal's decision to allow Jack Wilshere to leave Emirates Stadium was a "tactical" and "technical" one, according to Unai Emery.

Wilshere's 17-year association with Arsenal came to an end when he joined the Hammers on a free transfer after Emery was unable to give the midfielder any guarantees about first-team football.

Despite making his debut as a 16-year-old and establishing himself as a first-team regular by the age of 20, Wilshere's Arsenal career was blighted by injury and he made just 25 Premier League appearances in his last three seasons with the club.

Emery made no mention of Wilshere's injuries when discussing the decision to let the 26-year-old leave, telling reporters: "It was one decision, one private conversation and I want to respect that.

Delighted to have officially signed for West Ham United!After speaking with the manager and those at the club I knew my future was at the London Stadium and I can’t wait to get going now.It’s well known that I come from a family of Hammers and it’s a special moment to sign… July 9, 2018

"It was a tactical, technical decision. The conversation with Wilshere was a very good conversation, very direct, together. I explained to him my opinion and how I wanted to create the team, and I couldn't say for sure to him he was going to be in the 11 players.

"Also he explained to me the decision is not easy for him, but he wanted to choose the best option for him and every time it is with respect. I know this player here is important for the supporters and grew up here in Arsenal. But I don't give him one post in the starting 11 and is for that he chose to leave here, and I respect also this."

Emery made it clear that Aaron Ramsey is very much in his plans for the new season, praising the 27-year-old's work rate and ambition.

Ramsey too has struggled with injuries in recent years but, unlike Wilshere, was selected by former Gunners boss Arsene Wenger whenever he was available.

Emery indicated that the Welshman would be one of the first names on his teamsheet, saying: "I’m very happy with him.

"For me, every day, every training session, he has the ambition I want. He's working with a quality, the type of ability that I want. I want to work with him.

"In my opinion, I've said to Ivan [Gazidis, chief executive], Raul [Sanllehi, head of football relations] and Sven [Mislintat, chief scout] that I think he's an important player for me."