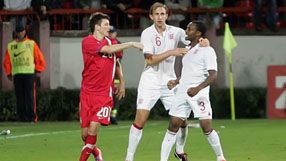 "The FA of Serbia absolutely refuses and denies that there were any occurrences of racism before and during the match at the stadium in Krusevac," the FSS said on its website.

"Making connection between the seen incident - a fight between members of the two teams - and racism has absolutely no grounding and we consider it to be a total malevolence."

England defender Danny Rose said he was racially abused by Serbia fans before and during the match which England won 1-0 and 2-0 on aggregate to reach next year's European Under-21 Championship finals in Israel.

Rose, sent off for kicking the ball away after the final whistle, was seen making an ironic monkey impression to the crowd and the FSS blamed him for causing trouble.

"Danny Rose behaved in inappropriate, unsportsmanlike and vulgar manner towards the supporters," the statement said.

England, who scored with the last kick of the game to win the second leg 1-0, were attacked by their Serbian opponents after the final whistle and a full-blooded brawl involving players and staff from both teams ensued.

The FSS said it would launch an inquiry and asked the English FA to follow in their footsteps.

"By this we inform the overall public that we will, as a matter of urgency, start an internal disciplinary procedure and punish the culprits after reviewing all the reports," it said.

"It will be done whether a possibly disciplinary procedure by the responsible UEFA bodies will be started or not.

"Furthermore, we will not either accept the fact that our players and members of the technical staff were provoked by the gesture of the English player Rose, since violence has no place at sports events. To be honest, we expect the same investigation from the English FA."