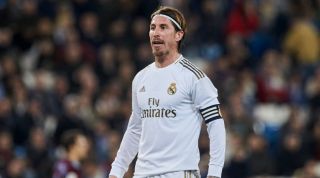 Sergio Ramos says there is "no rush" over his new Real Madrid contract after reports of a breakdown in discussions.

Ramos' current deal at the Estadio Santiago Bernabeu expires in 2021 and according to Goal, Madrid were prepared to extend that by a further 12 months.

However, the 33-year-old is looking for a two-year extension and that difference in opinion is what has led to negotiations stalling.

Yet Ramos insists there are no problems and he is ready to commit his future to Los Blancos.

"The relationship with the club is magnificent in every way. So there is no rush on any side - mine or the club," the defender said.

"I've never made extra demands, I understand the club's policy with players of a certain age. If the club wants me to stay, I'll stay, no need to worry."

Ramos is approaching 15 years at Madrid and has played an impressive 637 times for the club. During that time centre-back has won the Champions League and La Liga four times apiece, among several other honours.