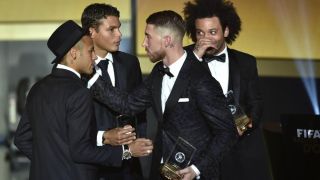 The former Santos man was reported to have met with a Madrid delegation ahead of the FIFA Ballon d'Or gala in Zurich.

The 23-year-old quickly denied such a meeting ever took place, while Barcelona coach Luis Enrique revealed last week that he expects Neymar to sign a new contract sooner rather than later.

That has not stopped Ramos from hailing the Brazil captain's talents, however.

"Neymar is a great player who can make the difference," the defender told reporters.

"Football is unpredictable and there will always be transfer rumours.

"But the one thing you will never see is Sergio Ramos joining Barcelona."

Madrid supposedly see Neymar as the long-term replacement for Cristiano Ronaldo, who has been linked with Manchester United, PSG and a move to MLS in recent months.

However, Ramos is keen for the Portugal international to stay at the Bernabeu for many more years to come.

"As Madrid captain, I would like to see Cristiano here for many more years," he added.