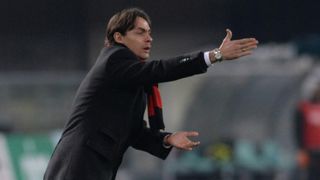 After a less-than impressive win over Cesena last weekend, Saturday's goalless encounter will once again raise question marks over the future of Milan coach Filippo Inzaghi, his side flattering to deceive despite dominating possession for long spells.

Mattia Destro had the clearest chance in a dismal first half, the striker meeting Andrea Poli's long ball only to fire straight at goalkeeper Albano Bizzarri.

That half-chance was the only high point of a drab opening, but things looked more promising three minutes after the break when Keisuke Honda rattled the crossbar.

It failed to spark the game into life, though, and Milan were ultimately grateful to Diego Lopez, as he made important saves to deny Ezequiel Schelotto and substitute Alberto Paloschi.

Milan remain in ninth after the draw but could find themselves back in the bottom half of the table by the end of the weekend if Torino and Palermo can pick up wins on Sunday.

Despite their inconsistencies in Serie A this season, the visitors started brightly, but their lack of quality in front of goal hampered their progress.

Destro was presented with the first chance following a long ball from Poli. The on-loan Roma striker escaped his marker but was unable to get a clean connection on his shot and Bizzarri saved easily.

Poli was again involved after quarter of an hour, as Mariano Izco brought him down on the edge of the penalty area. Alex's free-kick was blocked and Daniele Bonera failed to convert the loose ball.

Midway through the half, Milan needed a bit of luck as Sergio Pellissier bore down on goal, but Lopez and Luca Antonelli combined well to deny him.

The visitors continued to probe before the break, only for their attacking play to prove fruitless, with Destro going closest when he deflected Riccardo Montolivo's late shot off target.

Honda's introduction at the break for Montolivo sparked Milan into life and within three minutes of the restart the Japan international had struck the crossbar.

Cutting in from the right, Honda evaded two challenges before unleashing a vicious strike that thudded into the woodwork with Bizzarri well beaten.

Chievo's attacks were few and far between as they soaked up Milan's pressure, but their counter-attacking approach nearly paid off when Schelotto broke just after the hour.

Having escaped some questionable Milan defending, he unleashed a 20-yard effort towards the top corner that Lopez pushed away.

Lopez was needed again after 69 minutes as substitute Paloschi was allowed to turn and shoot inside the Milan penalty area, but the Spanish goalkeeper was able to push that effort over the crossbar.

Chievo's attacking threat quickly faded as they settled for a point, and Milan were unable to find enough creativity to make a late breakthrough, with substitute Alessio Cerci's weak effort summing up a disappointing encounter.