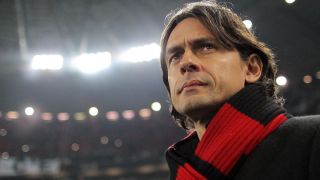 Inzaghi will reportedly lose his job if Milan, battling in 10th in the league, are able to win at San Siro.

The club's board had patience with the former striker, who was appointed at the helm in June after Clarence Seedorf's sacking.

But that is running out as the season approaches its decisive stages, and Milan are desperately trying to secure European football.

Inzaghi's side are eight points adrift of fifth-placed Fiorentina and a further three off Lazio, who sit in the final UEFA Champions League spot.

Jeremy Menez has stepped up for Milan with 12 league goals this season, and his team need a win against 15th-placed Hellas Verona.

A win at Cagliari last time out lifted Verona eight points clear of the relegation zone and they will carry that high to Milan.

Second-placed Roma are nine points adrift of league leaders Juventus ahead of a trip to Chievo on Sunday.

Rudi Garcia's men held Juve in their most recent league outing, but could close the gap to six points - at least until Monday - with a win over Chievo.

After two losses in three matches, Napoli are looking to get back on track when they host Inter in a key clash on Sunday.

Like their city rivals, Inter are struggling this season and sit ninth - and only a win would do against a team who are 10 points ahead of them.

Another battle for European spots takes place at the Stadio Olimpico.

Lazio host Fiorentina in a meeting between the teams sitting fourth and fifth respectively on the table.

Sampdoria will fancy their chances against relegation-threatened Cagliari and second-bottom Cesena are eyeing a second straight win when they host Palermo.

Edy Reja may have to wait to take charge of Atalanta for the first time, with their clash at stricken Parma set to be postponed.