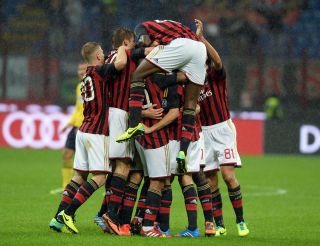 Massimiliano Allegri's men have slipped to 10th in the Serie A table and won just two of their last nine matches in all competitions.

Milan's slow start means qualification for the UEFA Champions League appears unlikely, with the San Siro outfit needing to dramatically improve if they are to challenge for a top-three finish.

No side in the top 10 have leaked more than the 17 conceded by Milan, who have also been unable to find a regular source of goals in the absence of Stephan El Shaarawy (foot) and Giampaolo Pazzini (knee).

Despite the result, Allegri expressed satisfaction at his team's display and wants to see more of the same against Fiorentina.

"We have to keep working and putting in this sort of performance," he told Sky Sport Italia.

"The side played well in terms of technique and defending, but we lost our unity a little after the equaliser and allowed a couple of dangerous counter-attacks.

"After going 1-0 up we didn't take some more chances, but then with this goal we were caught out after a corner and got punished."

Milan have lost their last two home matches against Fiorentina and will once again be without Philippe Mexes, who serves the last instalment of a four-match suspension.

Fellow defenders Daniele Bonera and Matias Silvestre are also absent, but goalkeeper Christian Abbiati could return from a calf injury.

That was the club's first defeat in seven matches, ending a run of form that included a come-from-behind 4-2 victory over reigning champions Juventus.

Fiorentina have lost just one of their seven competitive away games this term and boast the league's top scorer in Giuseppe Rossi.

The former Villarreal striker has made a superb return from a serious knee injury and already has nine goals to his name.

Argentinian defender Gonzalo Rodriguez will return from suspension for Fiorentina, while Mario Gomez and Massimo Ambrosini are doubts after they missed the Napoli defeat.