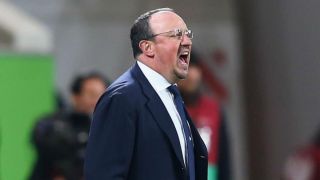 In what will be Rafael Benitez's last game in charge, Napoli need a win at Lazio on the final day of the Serie A season to secure a UEFA Champions League place.

Juventus are champions and Roma are guaranteed to finish second, but the battle for third is still alive.

Lazio occupy the place, three points ahead of Napoli, but the teams meet at the Stadio San Paolo on Sunday.

Napoli won the meeting between the teams earlier in the season, meaning another win and they will end up third – even though they have a poorer goal difference.

With Benitez linked heavily to Real Madrid, a win would be the ideal gift before his departure.

The Spaniard confirmed on Thursday he would be leaving Napoli at the end of the campaign.

Gonzalo Higuain (16 league goals) and Manolo Gabbiadini (15) will need to be watched carefully by the Lazio defence.

Juve finish their season with a trip to Hellas Verona, while Roma host Palermo and fifth-placed Fiorentina welcome Chievo to the Stadio Artemio Franchi.

There remains uncertainty over the final European place, with Genoa and Sampdoria pushing for it.

Sixth-placed Genoa visit Sassuolo on Sunday, but they are fighting to be granted a UEFA licence.

It could be good news for Sampdoria, who are seventh but could be promoted into European spots if Genoa are unable to get a licence.

Cesena and Cagliari are also relegated ahead of matches against Torino and Udinese respectively.

Elsewhere, mid-table Milan will be hoping they can finish their poor season on a high when they visit Atalanta, while Inter take on Empoli.