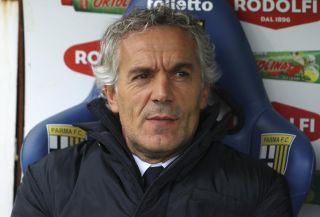 Roberto Donadoni's men have endured a miserable time in Italy's top flight this term and sit bottom of the league having won just two of their 14 matches.

Parma have also faced problems away from the pitch and were hit with a one-point deduction and €5,000 fine on Tuesday after missing tax payments and failing to pay the wages of players and staff.

President Tommaso Ghirardi and CEO Pietro Leonardi have also been banned from club-related activity for two months, although the club quickly confirmed their intention to appeal the Italian Football Federation's ruling.

There is no time for Parma to feel sorry for themselves, though, as they host a Cagliari side at Stadio Ennio Tardini who are enjoying a poor season of their own.

Zdenek Zeman's side, who are 18th, have just two league wins to their name - the last of which came at Empoli on October 25 - and the coach admitted his team did not "turn up" in last weekend's 2-0 loss at home to Chievo.

Cesena are the other club in the bottom three, their solitary league victory this season coming on the opening weekend against Parma.

They welcome a confident Fiorentina to Stadio Dino Manuzzi, with the visitors having followed back-to-back wins with a creditable 0-0 draw against champions Juventus last weekend.

Juve return to domestic action at home to Sampdoria after Tuesday's 0-0 draw with Atletico Madrid booked their place in the UEFA Champions League knockout stages.

Massimiliano Allegri's men are playing the third of five matches in the space of 18 days and striker Carlos Tevez admits the upcoming mid-season break will be a welcome relief.

"The Christmas break and holidays will do us good," he told the club's official website. "We've had four months of playing regular football, it's normal that a bit of tiredness has started to creep in."

Roma also played in the Champions League in midweek and will look to rebuild from the disappointing exit to Manchester City on Wednesday when they visit Genoa.

Milan host Napoli at San Siro with both clubs aiming to move on from disappointing results last weekend, the former losing 1-0 at Genoa while Rafael Benitez's team drew 2-2 with Empoli.

Christian Maggio sees no reason why Napoli, who are currently fifth, cannot claim third spot and a Champions League place this season, but the full-back is targeting more.

"We have the chance to reach third place but I always hope for something more, we have that possibility," said Maggio.

Also on Sunday, Udinese host Verona, while Palermo and Lazio have home fixtures with Sassuolo and Atalanta respectively on Saturday.

Torino and Inter face away games at Empoli and Chievo on Monday.