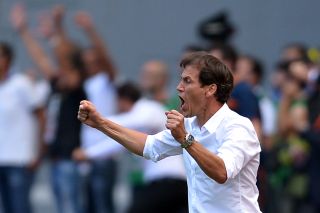 Garcia has turned the club around after taking over in June and they have a 100 per cent record, including an impressive 2-0 victory in the Rome derby last time out.

However, they were unable to beat Sampdoria last season, and have only won once in their last seven meetings.

Sampdoria have yet to win this season – in fact the two points they have collected have come away from home – so they will be hoping to collect their first points of the season at the Luigi Ferraris.

Napoli welcome Sassuolo to the San Paolo and they will be confident of recording a big victory.

Eusebio Di Francesco's side are competing in the top flight for the first time but have found it tough going, and were beaten 7-0 by Inter on Sunday.

Rafael Benitez's side could pile more misery on Sassuolo if they can match Sunday's performance against Milan, when they beat them at San Siro for the first time in 27 years.

Close-season arrival Gonzalo Higuain has filled the void left by Edinson Cavani well and has scored four in five for his new club in all competitions.

Walter Mazzarri has revamped the Inter squad and they look likely to improve on their ninth-place finish last season.

Fiorentina should pose a much harder test than Sassuolo did on Sunday, given that Vincenzo Montella's side are also yet to lose in the league.

However, without injured duo Josip Ilicic and Mario Gomez, they could find it hard to add to their 10 goals against Inter's miserly defence, which has only conceded once.

Defending champions Juventus travel to Chievo on Wednesday looking to maintain their impressive record against Giuseppe Sannino's side.

Juventus have only lost once in their 20 meetings and did the double over them last season.

Antonio Conte is set to be without Simone Pepe (thigh) and Martin Caceres (knee) as they prepare to face opposition from Verona for the second time in four days.

Catania – fresh from their first point of the season against Parma – face Lazio, who will be keen to put their derby defeat behind them.

Vladimir Petkovic will be without Andre Dias after his dismissal against Roma, and he also has Diego Novaretti (foot), Lucas Biglia (calf), Stefan Radu (knee) and Giuseppe Biava (foot) on the sidelines.

Milan will face Bologna without Mario Balotelli after the striker was shown a red card after the final whistle following the 2-1 defeat to Napoli.

The striker will serve a three-game ban after having two games added to his initial suspension for intimidating the referee.

Massimiliano Allegri's side have made a stuttering start to the season with just one win so far, but they will be confident of getting their second against a side that they have not lost to since 2008.

Like Milan, Udinese have made a low-key start to the campaign and they will be looking to bounce back from Saturday's defeat to Chievo when they face Genoa on Tuesday.

Elsewhere, Livorno will aim to continue their good start to the season when they face Cagliari, while Verona travel to Torino for their second game in Turin in four days.

The final game of the round sees struggling Parma host Atalanta as they try to collect their first win of the term.