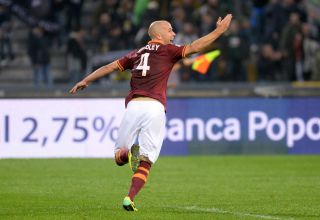 Rudi Garcia's side became the first in Serie A history to make it nine wins from their opening nine fixtures when they overcame a Maicon red card to pick up a 1-0 victory at Udinese on Sunday, and they will be heavy favourites for the visit of Chievo, who have just one win to their name so far.

The strugglers have only ever beaten Roma on three previous occasions, but - encouragingly for this week's visitors to the Stadio Olimpico - two of those came last season as they won 1-0 both home and away.

With Roma five points clear of closest rivals Napoli, their position at the top of the league is under no threat, though the chasing pack will be keen to keep up the pressure on the frontrunners.

Second-placed Napoli head to Fiorentina as part of the main bulk of fixtures on Wednesday, looking to get their away form back on track after a run of victories in their opening three fixtures on the road came to an end in a 2-0 defeat at Roma on October 18.

Rafael Benitez's men have since won 2-0 against Torino and will not want to give an inch in the race for the title.

Currently behind Napoli on goal difference, Juventus could be looking to add significantly to their tally as they welcome lowly Catania to Juventus Stadium.

Juve followed up back-to-back defeats against Fiorentina and Real Madrid with a 2-0 victory over Genoa last time out, and will fully expect make it back-to-back wins against a side who have not beaten them since 2009.

Both clubs have struggled to make any impact in the top flight this season, and will view this fixture as a chance to kick-start their campaigns. Milan, in particular, will want to make the most of their home advantage, having failed to pick up a single victory on the road so far this season.

Elsewhere on Wednesday, Verona meet Sampdoria at the Stadio Marc'Antonio Bentegodi, Cagliari host Bologna, Genoa face off against Parma, Torino head to Armando Picchi to take Livorno and Sassuolo go in search of just their second win of the season as they do battle with Udinese at the Citta del Tricolore.

The week's action, however, kicks off on Tuesday, as Inter Milan take on Atalanta at the Stadio Atleti Azzurri d'Italia, with the fourth-placed side looking for a first victory over Stefano Colantuono's side since April 2010.