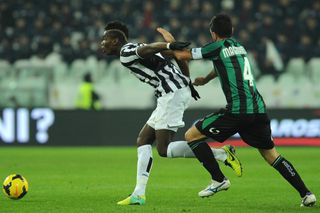 Eusebio Di Francesco's side have moved out of the drop zone due to an impressive resurgence in the last three games, beating Atalanta and Chievo and earning a draw with Cagliari.

They face a stern test in attempting to continue their impressive form against leaders Juventus, who head into the game on the back of a disappointing result in Europe in midweek.

The Turin giants slipped to a 2-1 defeat at Portuguese champions Benfica in the UEFA Europa League semi-final first leg on Thursday, so they will have to come from behind to reach the final at their own Juventus Stadium next month.

Coach Antonio Conte will expect a response from his side on Monday, as they close in on another Scudetto.

Roma cut Juve's lead at the summit to five points with a 2-0 success against Milan on Friday and the capital club will be hoping Sassuolo do them a favour by securing a shock triumph.

However, the prospects of Di Francesco's men consigning the champions to only their third league loss of the campaign would appear slim, especially considering the heavy defeat Conte's side inflicted on them in the reverse fixture.

Juve were comprehensive 4-0 winners on that occasion back in December, with Carlos Tevez scoring a hat-trick.

But that defeat is not playing on the mind of Sassuolo captain Francesco Magnanelli, who is undaunted by the task facing Conte's men.

"Against Juventus we face an extremely tough match, but this town and this team deserve to be playing in these matches. We will give it a go.

"We know we have a tough run-in, but at this point we deserve to be fighting to stay up and we will try right until the end. The whole group believes."

Sassuolo will face a near fully-fit Juve squad at Stadio Citta del Tricolore, with midfielder Arturo Vidal their only absentee because of a knee injury which reportedly could require surgery.

Meanwhile, the hosts will be without three key players due to suspension.