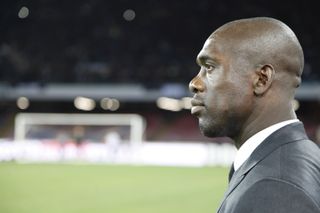 Since taking over in January, the Dutchman had guided Milan to two wins and a draw in Serie A before Napoli overturned them 3-1 at San Paolo on Saturday.

Gokhan Inler's goal and a Gonzalo Higuain brace ensured Napoli of the points on Saturday, but Seedorf will be confident his side can get back on track against a Bologna outfit just four points off the relegation zone.

Sunday's 2-1 victory over Torino ended a run of five matches in the league without a win for Davide Ballardini's men - who have failed to beat Milan since August 2008 when goals from Marco Di Vaio and Francesco Valiani handed Bologna the points.

Seedorf handed debuts to Michael Essien and Adel Taarabt against Napoli, with the latter scoring the opening goal, and the former Chelsea man feels the Moroccan has plenty more to give.

"Taarabt scored a great goal and allowed us to finish the first half level with Napoli," Essien told Milan's official website.

Leaders Juventus, having taken five points from their last possible nine, host Chievo in a rare stuttering patch that has seen them concede goals in each of their last five Serie A outings for the first time since March 2011.

Any slip-up from the champions will be greeted well by Roma and Napoli behind them, as they take on Sampdoria and Sassuolo respectively.

Napoli currently occupy the final UEFA Champions League spot, but could find their position under severe threat if they drop points and Coppa Italia finalists Fiorentina can edge Inter in Saturday's only game.

At the bottom, Catania could move out of the bottom three if they are able to inflict a first league defeat of 2014 on Lazio.

Catania are unbeaten in three Serie A matches, while 18th-placed Livorno face fellow strugglers Cagliari at the Stadio Is Arenas.

Udinese are in fine form currently, winning their last two in the league before bowing out of the Coppa Italia in the semi-finals to Fiorentina, meaning Genoa will likely have their work cut out when the sides meet at the Stadio Luigi Ferraris on Sunday.

Elsewhere on Sunday, Atalanta host Parma, while Monday's only game sees two of the season's surprise packages meet at the Stadio Marc'Antonio Bentegodi.

Sixth-placed Hellas Verona meet Torino, two places adrift in the league, with just three points separating them in the table.