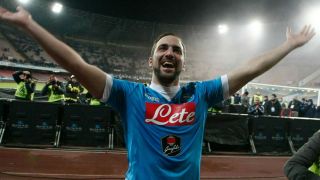 Napoli capitalised on Inter's earlier slip-up at Atalanta and extended their advantage at the top of Serie A with a 3-1 triumph over Sassuolo.

Inter, who suffered a shock 1-0 loss to Sassuolo last weekend, fell behind due to an early Jeison Murillo own-goal at the Atleti Azzurri d'Italia.

Roberto Mancini's men were level when Rafael Toloi followed suit by slicing into his own net, but they could not force a winner and are now four points behind Napoli, who made much lighter work of their recent tormentors despite falling behind.

That was Callejon's first Serie A goal since April 2015, but his fellow Real Madrid forward Gonzalo Higuain has been far more prolific and the Argentina international then took centre-stage.

Higuain timed his run superbly to convert Marek Hamsik's cutback three minutes before half-time and he scored his 20th goal in as many league matches deep into second-half stoppage time.

Champions Juventus will be Napoli's nearest challengers, two points behind, if they win at Udinese on Sunday.

Elsewhere, Ciro Immobile opened the scoring with a penalty on his Torino return and Andrea Belotti netted a brace before setting up Marco Benassi in Torino's 4-2 win third-bottom Frosinone.