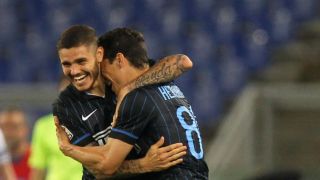 Hernanes came back to haunt nine-man Lazio as his brace inspired Inter in an action-packed 2-1 Serie A victory on Sunday, while Cesena had their relegation confirmed after losing 3-2 to Sassuolo.

Hernanes was playing against his former team at Stadio Olimpico for the first time since his January 2014 move, and he cancelled out Antonio Candreva's early opener with a 24th-minute free-kick - for which Lazio centre-back Mauricio was sent off for a last-man foul on Rodrigo Palacio.

The Rome club battled superbly despite the numerical disadvantage, but their task was made even tougher when goalkeeper Federico Marchetti saw red for hauling down Mauro Icardi just after the hour.

Argentina international Icardi then missed the penalty, though that miss did not prove decisive as Hernanes kept his cool when one-on-one six minutes from time to break Lazio's brave resistance, leaving Inter three points off fifth and a guaranteed Europa League spot.

Cesena joined Parma in having their relegation mathematically confirmed after they slumped to a 3-2 defeat at home to Sassuolo at the same time as Atalanta beat Palermo by an identical score.

For Cesena to stand any chance of staying up, they needed to win and hope Atalanta lost and, although they themselves were two up by the 30th minute, so were Edy Reja's men.

Cesena ultimately ended up surrendering their two-goal lead and Sassuolo left with the spoils, while Atalanta held on to victory despite Vlada Avramov's 56th-minute sending off, leaving them eight points clear of the bottom three with three games to go.

Napoli ended the weekend three points behind third-placed Lazio in the final UEFA Champions League spot despite only managing a 2-2 draw at rock-bottom Parma, a game marred by a heated clash between representatives from both clubs at full-time.

In the race for the Europa League places, Fiorentina – who lost 3-0 at Sevilla in the very same competition on Thursday – remain fifth after beating Empoli 3-2 on the road in the Derby di Toscana, Josip Ilicic scoring twice.

Sampdoria are just a point behind, however, after they thrashed hosts Udinese 4-1 to stay in possession of the final European place.

Chievo and Hellas contested the Verona derby in the day's early kick-off and after a dramatic first period including all four goals, the two sides finished level at 2-2.