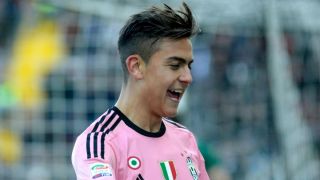 Juventus extended their Serie A winning streak to 10 matches with a crushing 4-0 win away to 10-man Udinese.

Dybala has now hit six goals in eight domestic matches for Juve, who are seeking a fifth consecutive Scudetto, although Juve's task was simplified by Danilo's 25th minute red card.

Juve's win spoiled the party for Udinese, who were celebrating the official unveiling of their revamped Friuli stadium.

AC Milan defied their recent poor record against Fiorentina after Carlos Bacca and Kevin-Prince Boateng struck in a 2-0 win.

Bacca eased pressure on under-fire Milan coach Sinisa Mihajlovic with a fourth minute goal and Boateng came off the bench late in the game to score on his second debut for the club.

Genoa leapfrogged relegation rivals Palermo after a crushing 4-0 home win over the Rosanero, who had Sinisa Andelkovic sent off with the score at 1-0.

Lazio fought back from 2-0 down to draw 2-2 at Bologna after Adam Masina's red card for La Dotta and mid-table sides Chievo and Empoli played out a 1-1 draw.