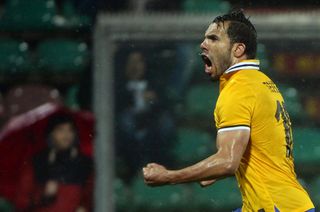 With three games now remaining, Antonio Conte's side extended their lead over Roma to eight points at a sodden Stadio Citta del Tricolore, recovering from a poor start to record their 30th league win of the season.

The home side went in front in the early stages through Simone Zaza, but Juve were level before half-time thanks to Carlos Tevez's rasping drive.

There was more subtlety about Juve's second goal, Claudio Marchisio cushioning a volley into the net after getting on the end of a lofted pass from Andrea Pirlo, before the result was wrapped up thanks to Fernando Llorente's close-range finish.

Sassuolo came into the game having earned seven points from their previous three outings, but Monday's defeat leaves them in 17th place, only above the drop zone due to their superior head-to-head record with Bologna.

Victory for Juve is another step towards a third consecutive Scudetto and Conte's men will finish the job if they beat Atalanta at home in seven days' time, or if Roma fail to win at Catania 24 hours earlier.

Juve made an uncharacteristically slow start to the game and Nicola Sansone flashed a shot narrowly wide in the second minute before setting up the opening goal seven minutes later.

Sansone supplied strike partner Zaza, whose shot took a deflection off the foot of Angelo Ogbonna and skidded off the wet surface before creeping under the body of Gianluigi Buffon at the near post.

It took until the 22nd minute for Juve to muster a meaningful effort, Tevez firing a volley wide of the left-hand post after being teed up by Giorgio Chiellini.

It was the Argentine who levelled matters 10 minutes before the break, finding a pocket of space on the edge of the box and unleashing a shot that whistled beyond Gianluca Pegolo via a slight deflection off Alessandro Longhi.

The hosts responded strongly, Zaza forcing a fine save out of Buffon at the near post as Sassuolo ended the first half with a flourish.

The home side's positivity was punctured 13 minutes after the interval, however, as Marchisio caressed a low finish beyond Pegolo after being picked out by Pirlo's deft chip over the Sassuolo backline.

Marchisio stung the palms of the goalkeeper 10 minutes later from Paul Pogba's lay-off, while Tevez struck the crossbar with a curling effort 13 minutes from time.

Juve did claim the third goal that their second-half dominance merited when Llorente turned home substitute Stephan Lichtsteiner's cross in the 76th minute.

And Conte's focus will now shift to overturning a 2-1 deficit in Juve's UEFA Europa League semi-final second leg at home to Benfica on Thursday.