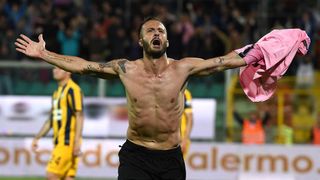 Alberto Gilardino described Palermo's Serie A survival as a "miracle" after a final-day 3-2 win over relegated Hellas Verona.

The result preserved Palermo's top-flight status by a point as a five-match unbeaten run to end the season sent Carpi back to Serie B.

Gilardino conceded it had been a tough season for the club, but he was relieved to end it on a positive note.

"After a difficult season we were able to make a beautiful sports miracle," the 33-year-old told Sky Italia.

"I am happy for myself, for my team-mates and for these fans.

"We knew that against Verona would be a difficult game, but we did well and we managed to win a race that had apparently ended a month and a half ago.

"Many did not think we could survive for a month now, but we stuck together and managed to do all this."

Palermo took a 1-0 lead through Franco Vazquez after 28 minutes, but both teams were reduced to 10 men after 38 minutes when Pawel Wszolek and Michel Morganella were dismissed.

Federico Viviani had Palermo hearts in mouths when he equalised after 48 minutes, before goals from Enzo Maresca and Gilardino secured three crucial points for the jubilant hosts.