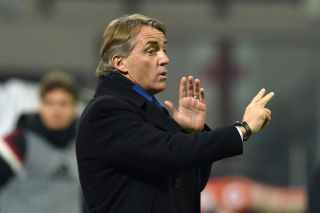 Mancini returned to the club he left in 2008 last week, replacing the departed Walter Mazzarri, who paid the price for an inconsistent start to the season.

Inter claimed three successive Serie A crowns in Mancini's first reign, but they were unable to get the former Manchester City boss' second reign off to a winning start at San Siro on Sunday.

Milan hit the front midway through the first half thanks to Jeremy Menez's superb volley from 12 yards.

Inter toiled in their quest for an equaliser, but they levelled just after the hour mark as Obi drove in his first Serie A goal.

Both sides had chances to win it in the final stages - Stephan El Shaarawy hitting the crossbar for Milan and Mauro Icardi lifting a half-volley narrowly over for Inter, but the points were shared as both teams continue to languish in mid-table.

At the Stadio San Paolo, Napoli twice threw away winning positions in a 3-3 draw with Cagliari.

Rafael Benitez's side were two up inside half an hour thanks to goals from Gonzalo Higuain and Gokhan Inler, but they were pegged back either side of half-time.

Victor Ibarbo reduced the arrears in the 38th minute, with Diego Farias drawing the visitors level two minutes after the break.

Jonathan de Guzman restored Napoli's lead shortly after the hour mark but Cagliari - led by Zdenek Zeman, who had a short stint in charge of Napoli in 2000 - earned themselves a point as Farias grabbed his second shortly after De Guzman's goal.

There was a landmark day for Udinese's Antonio Di Natale, who scored his 200th Serie A goal in his 400th appearance as his side drew 1-1 at home to Chievo.

Rock-bottom Parma's woes continued as they went down 2-0 at home to Empoli courtesy of Matias Vecino and Francesco Tavano.

It was another dismal day for Parma, who had been trounced 7-0 by Juventus in the game preceding the international break, with head coach Roberto Donadoni insisting he will not give up despite his team's plight.

Sassuolo extended their unbeaten run to six matches as they won 1-0 at Torino, who have now lost three in succession.

Juan Sanchez Mino missed a first-half penalty for the hosts, and they were made to rue that wastefulness as substitute Antonio Floro Flores struck the winner three minutes from time.

Elsewhere, Constantin Nica's own goal rescued a 1-1 draw for fourth-placed Sampdoria at struggling Cesena, while goals from Gonzalo Rodriguez and Juan Cuadrado earned Fiorentina a 2-1 success at Verona.