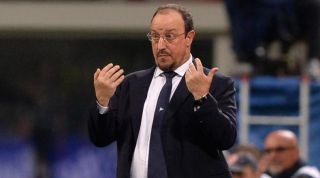 Rafa Benitez's men saw their lead over the Florence club cut to eight points as they were frustrated at San Siro.

Napoli should have claimed victory against the Spaniard's former employers, but they were left to rue wasteful finishing.

And indeed there could yet be worse news for Benitez - and potentially World Cup-bound Argentina - after striker Gonzalo Higuain was carried off on a stretcher late on with an ankle injury.

An even first half saw both teams craft opportunities, but Napoli forward Jose Callejon could not convert to give his side the advantage, while goalkeeper Pepe Reina was rarely troubled.

The visitors went close again early in the second period, but Jorginho was denied in the 50th minute.

Higuain also had chances before his injury forced him off, while Gokhan Inler struck a post in the final 20 minutes.

Despite the draw, Napoli remain strong favourites to clinch third in the battle for UEFA Champions League football with three games remaining.

But Fiorentina at least ensured that the race was extended with a routine 3-0 win at relegation-threatened Bologna.

Juan Cuadrado and Josip Ilicic scored in the first half to give the Coppa Italia finalists a commanding lead going into the break.

Fiorentina denied Bologna an unlikely fight back and wrapped up the points in the 87th minute when Colombia international Cuadrado grabbed his second of the day.