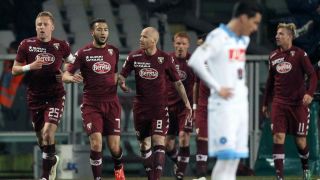 Capital club Lazio were 3-0 winners at Sassuolo, Fiorentina defeated Inter 1-0 at San Siro and Sampdoria were 2-1 victors at Atalanta - the three sides heaping pressure on faltering third-placed Napoli, who lost for a second time in their past three league outings.

Napoli remain in the UEFA Champions League places on 45 points, but Lazio (43), Fiorentina (42) and Sampdoria (39) would all have been smiling after Rafael Benitez's men slipped up at Torino 1-0.

Torino remain unbeaten after 12 Serie A matches, a streak that has seen them climb to eighth on 36 points.

Felipe Anderson scored Lazio's opener on the stroke of half-time against Sassuolo and set up Miroslav Klose to double their lead before Marco Parolo added a third in the 77th minute.

Fiorentina are unbeaten in 12 in all competitions after Mohamed Salah's goal 10 minutes after the interval decided their fixture in Milan.

Sampdoria came from behind to end their winning drought and inflict a fourth straight defeat on Atalanta. Stefano Okaka assisted Luis Muriel for Sampdoria's second-half equaliser before Okaka's first goal since December got them back to winning ways.

Second-bottom Cesena recorded a 1-0 victory at home to faltering Udinese, Empoli and Palermo played out a 0-0 stalemate and Verona won 2-1 away at Cagliari, putting eight points between themselves and their 18th-placed opponents to improve their survival prospects.