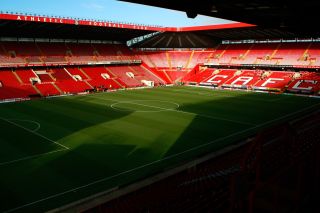 The men, supporters of Charlton, were sentenced at Blackfriars Crown Court on Wednesday for their actions after the fixture at Craven Cottage, with the chanting taking place on a train between Putney and Waterloo.

Six of the men received custodial sentences of between eight and 18 months, as well as eight-year banning orders from football grounds across Britain, with the seventh receiving a six-month sentence suspended for 18 months.

The latter was also given a curfew order for six months, as well as a four-year football banning order.

The British Transport Police, along with representatives of the Metropolitan Police and Charlton, helped to bring about the arrests of nine men a fortnight after the incident before they were sentenced.

In a statement, detective sergeant Jane Hill of the British Transport Police, said: "The actions of these men were both offensive and extremely intimidating to other passengers on board the train at the time.

"An investigation was swiftly launched to gather evidence and by working closely with Charlton Athletic FC, coupled with excellent CCTV footage, intelligence reports and statements from witnesses, we were able to move quickly to trace the men."

Meanwhile, Charlton have also welcomed the verdicts, with the club's head of operations Mick Everett labelling the incidents a "kick in the teeth to everyone associated with the club".

In an official statement released on the club's website, Everett added: "Their actions are totally condemned by everyone at the club and indeed, I am sure, by Charlton supporters everywhere."