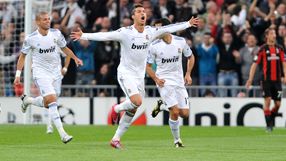 Seven teams can progress to the last 16 with two matches to spare after a series of open displays showed that cagey wins and strategic draws are out of vogue in the group stages of the world's elite club competition.

Inter beat Tottenham Hotspur 4-3 at home in a remarkable Group A game last time, and if the holders beat the English club on Tuesday they will go through irrespective of Werder Bremen's result against Twente Enschede.

Rafael Benitez's team was 4-0 up in 35 minutes two weeks ago before Gareth Bale's hat-trick for Spurs. And although the Inter coach will want his injury-hit side to tighten up defensively at White Hart Lane, there is a sense that attack is now the best form of defence.

Jose Mourinho was defensive at times last season, when he led Inter to the Champions League title, but his Real Madrid side came out all guns blazing at home to AC Milan last month to record an easy 2-0 win.

The Portuguese could be planning an attacking return to the San Siro on Wednesday given that Real know a fourth successive Group G win would put them through to February's first knockout round.

The form of Cristiano Ronaldo, who scored two more goals in Saturday's 3-1 win at Hercules, is a reason for optimism for the nine-times winners - as well as Milan's 2-1 home defeat by Juventus in Serie A this weekend.

"I'm in great form and having a phenomenal run," Ronaldo told reporters.

Lionel Messi is having a personal battle with Ronaldo to see who can light up La Liga the brightest, and the rivalry could carry through to the Champions League with the Barcelona maestro looking as dangerous as ever.

Two goals sealed Barca's home win over FC Copenhagen in their last Group D game, and the Argentine was prominent again on Saturday with another brace in the 5-0 humbling of Sevilla.

A victory in the Danish capital on Tuesday will herald Barca's progression from the group stage, and a possible rest for Messi in the last two group matches.

Last season's runners-up, Bayern Munich, were lax in defence during the 3-2 win over CFR Cluj a fortnight ago, continuing the overall theme this term, but that result means a top-two finish in Group E could be assured with a point in Wednesday's return.

Arsenal, Chelsea and Olympique Lyon also have nine points from a possible nine, with Arsene Wenger's side topping the scoring so far with a whopping 14 goals. Progression awaits this week for all three if they win, while a draw may suffice for the French club.

"We have matured," Wenger said, adding that Cesc Fabregas is a slight doubt for Wednesday's Group H game at Shakhtar Donetsk.

"You can see that when it doesn't work for us, the players remain calmer than before."

Manchester United are the only group leaders who will not be able to seal their last-16 spot this time, but a win at Turkish champio