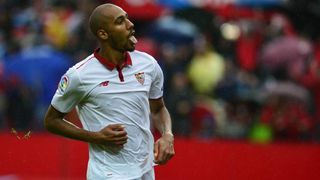 Jorge Sampaoli's men came into the game in fourth after a strong start to the season and, having dominated possession for much of the match, they claimed a deserved first win over Atletico in any competition since October 2010.

Angel Correa wasted a glorious chance towards the end of a tight first half and Sevilla should have capitalised on that just after the break – Samir Nasri hitting the post and Vitolo going close.

That proved to be the start of a dominant second-half performance from Sevilla and, although Atletico became compact, the visitors were undone 17 minutes from time as N'Zonzi bounded clear to score his first goal of the season.

Koke compounded Ateltico's frustration a few moments later as he was sent off for a second bookable offence and Sevilla held on to top of the table for at least a few hours and end the visitors' unbeaten start to 2016-17.

The opening stages were very much a battle for supremacy in midfield and, although Sevilla saw more of the ball, they occasionally proved to be their own worst enemy.

Franco Vazquez had an early cross-field pass intercepted by Kevin Gameiro and the former Sevilla favourite caused panic in the home defence before he was tripped by Adil Rami, but Antoine Griezmann smashed the resulting free-kick into the wall.

Sevilla soon settled and crafted their first chance in the 15th minute, as N'Zonzi headed Nasri's cross into the arms of Jan Oblak.

Atletico went close shortly after, but Sergio Rico did well to deny Gameiro after the Frenchman burst into the left side of the area and shot.

The match developed into a cagey tactical battle with few clear openings, but Correa spurned a rare opportunity just before the break, latching onto a lofted pass into the box before inexplicably missing the target from 12 yards.

Sevilla looked to up the ante after the break and swiftly went desperately close to the opener – Nasri inspiring a fantastic one-touch passing move and then striking the post from 20 yards.

The hosts went close again a few moments later. Diego Godin failed to meet Mariano's cross and it fell kindly for Vitolo in the centre of the area who blasted straight at Oblak.

Oblak could do little to stop Sevilla as they eventually went ahead, though. Atletico loanee Luciano Vietto played a clever pass over the visitors' high defence and N'Zonzi charged through before calmly converting into the bottom-left corner.

Atletico's position was made even trickier shortly after, as Koke recklessly caught Rami and earned a second yellow card, easing Sevilla through the closing stages and to the league's summit ahead of Real Madrid's clash with Athletic Bilbao later on Sunday.