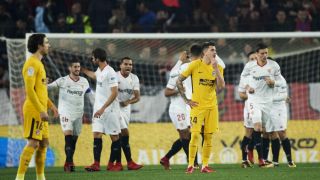 Sevilla advanced to the Copa del Rey semi-finals with a 3-1 second-leg victory over Atletico Madrid at the Ramon Sanchez Pizjuan on Tuesday, despite a stunning goal from Antoine Griezmann.

Escudero netted after just 24 seconds – the quickest goal scored against Atletico in any competition under Diego Simeone – but Griezmann's exquisite effort got the visitors back on level terms on the day.

One more goal for Atletico would have forced extra time, but those hopes were wiped out when Saul clattered into Joaquin Correa – scorer of an 88th-minute winner in the first leg – and Banega coolly beat Miguel Angel Moya from the spot.

The match became increasingly heated and Simeone used all three of his substitutes by the 64th minute as he attempted to engineer a comeback, but Sarabia punished them on the counter-attack to put the match to bed.

Simeone was sent to the stands in the aftermath of the goal and will now focus on ending his side's three-match winless run against LaLiga's second-bottom side Las Palmas on Sunday.

An incredible start saw Sevilla take the lead in the opening minute, Escudero getting in front of Sime Vrsaljko to volley Sarabia's right-wing cross into the bottom-left corner.

Atletico responded by forcing a corner from which Jose Gimenez headed straight at Sergio Rico, but the Sevilla goalkeeper could do nothing to keep out Griezmann's equaliser.

France international Griezmann generated sensational power and dip as he fired a bouncing ball over Rico from 25 yards after Kevin Gameiro's knockdown.

Sevilla proved susceptible to Atletico's direct attacking, Angel Correa firing off target rather than squaring for Gameiro following a brilliant throughball from Koke.

Franco Vazquez spurned a glorious chance to restore the hosts' lead when he headed wide before half-time, but Saul's foul on Joaquin Correa enabled Banega to slot home from the penalty spot within three minutes of the restart.

Angel Correa would have levelled it had Rico not got a strong arm in the way of his shot after Saul found him alone on the right side of the box.

Tempers began to flare and Gabi and Vazquez were booked for a clash in midfield, while Angel Correa saw yellow for a late challenge on Escudero before making way for Yannick Carrasco on the hour mark.

Simeone had already replaced Gabi with Fernando Torres and his third substitution sent Thomas Partey into the fray at the expense of Gimenez, but their aspirations of a comeback were dashed 11 minutes from time.

Vazquez released Sarabia and the winger showed great composure to guide a left-footed effort beyond the idle Moya and into the bottom-left corner, completing a rousing win for Vincenzo Montella's men.