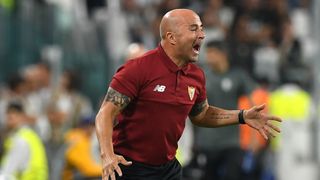 Sevilla and the Argentine Football Association (AFA) have reached an agreement in principle for Jorge Sampaoli to become the new head coach of Argentina, the LaLiga club have announced.

Sampaoli joined Sevilla before the start of this season and guided them to a fourth-place finish in Spain's top flight, but the closing weeks of their campaign were dominated by speculation linking him with the national team post in his homeland after Edgardo Bauza was sacked.

The former Chile boss and 2015 Copa America winner described leading Argentina as his "dream" job and told reporters after last weekend's final match of the campaign, a 5-0 win over Osasuna, that the AFA needed to resolve his contract situation with Sevilla.

In a statement on their official website, Sevilla confirmed such an agreement had been secured.

"Sevilla and the Argentine Football Association (AFA) have reached an agreement in principle for the release of Jorge Sampaoli as coach of the Nervion outfit in order for him to become head coach of Argentina," the statement read.

"This agreement in principle is pending the drafting and presentation of the pertinent documents, which must be signed by the parties next Thursday, June 1.

"In the conversations between Sevilla and the AFA, who served as representatives of Jorge Sampaoli, the fixed amount for the termination of the coach's contract was not discussed at any time. All parties are satisfied by the agreement that has been reached."

Bauza's eight-month tenure with Argentina ended after a 2-0 defeat in Bolivia in March that left the two-time world champions' hopes of qualification for Russia 2018 in the balance.

The AFA named a squad for June friendlies against Brazil and Singapore this month that was widely felt to bear Sampaoli's prints, with Inter striker Mauro Icardi recalled as Manchester City striker Sergio Aguero missed out.