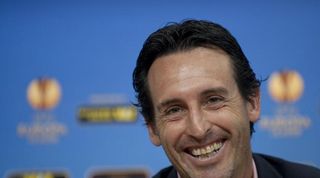 Emery's charges host his former club Valencia in the opening match of the last-four tie on Thursday, with the return leg taking place the following week.

But the 42-year-old insists his focus is solely on picking up a victory in this week's encounter.

"No two games, there is one, no management two games, is a game, managing 90 minutes," he said. "There is only one match, we have to flow into that game."

But Emery was quick to add that nothing would be resolved in the first leg.

"Within 90 minutes will be solved nothing," he continued. "There will be a continuity of 180 minutes there."

Emery managed Valencia between 2008 and 2012, but claimed there would be no split loyalties on Thursday.

"I am 100 per cent Sevilla," he added. "In all the teams I've been I have good memories and Valencia have made me a better coach and a better person, but now my feeling is 100 per cent of Sevilla, and my only thought is to do good for all of us."

Sevilla have failed to beat Valencia in two league meetings this season, losing one and drawing the other.