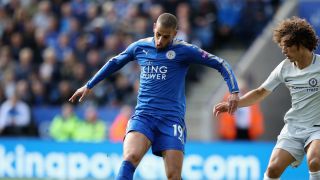 Craig Shakespeare was frustrated to see Leicester City come up short in the big moments again during their 2-1 Premier League defeat at home to Chelsea on Saturday.

Islam Slimani was sent clean through during the first half at the King Power Stadium but failed to capitalise, with Alvaro Morata punishing him less than two minutes later by heading home the opener for Chelsea.

N'Golo Kante got the Blues' second against his former club, with Jamie Vardy's penalty after the hour mark proving to be just a consolation.

Slimani's miss rankled with Shakespeare following the final whistle, but he was pleased by the way they performed in the second half.

"The big moments are going against us at the moment. We had a chance and a minute later they go down the other end and score," the Leicester boss told the BBC.

"We are disappointed and had to change our shape. The players applied themselves magnificently in the second half, on another day it might have gone our way.

"We said the first six games would be a challenge. We go again and have to dust ourselves down. We have a very important game against Huddersfield next week."

are throwing everything at Chelsea in the closing stages at King Power Stadium. September 9, 2017

Vardy assured Leicester gave it their all and was adamant his penalty was deserved, despite the Chelsea defenders claiming Thibaut Courtois made no contact with him.

"We definitely left everything out there but it wasn't enough in the end," said the striker.

"It was a definite penalty, he clipped my shin pads. Their centre-backs said differently but I am sure they will think differently when they see it."