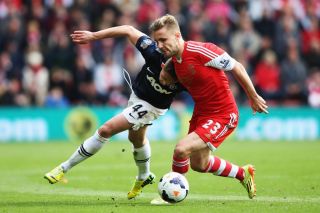 The Southampton left-back, 18, has the lone cap for England so far, and said he knew Roy Hodgson's snub to Ashley Cole spelt a dream fulfilled for himself.

"When I found out Ashley Cole wasn't going I had that thought it could be me going but I didn't want to over-think saying 'I am definitely going' because I didn't receive anything that night.

"I thought everyone was getting a phone call on Sunday night and I was speaking with Ads (Lallana) and Lambo (Lambert) asking if they had got one and once it went past 10pm, none of us had had the call so we thought we were among the seven (from the initial 30-man squad) not going.

"When the squad came out the next afternoon me and my family sat there thinking 'I'm 18 and I'm going to a World Cup'."

Shaw said his hopes were raised throughout the season, with Hodgson present at several Southampton games but he never took a World Cup spot for granted - and still hasn't yet.

"I am still shocked that I am actually going. You always had that thought in your head that you might be picked because Roy was watching a lot of our games, not just for me of course," he said.

"But I wasn't expecting it. I thought I might be in the 30-man squad so to represent my country at a World Cup when I am only 18 is the best feeling in the world and I want more of it.

"Time flies. A year ago I made my Under-21 debut and now I'm going to a World Cup. Things can happen so fast. I am going to pray I don't get injured so I can be on that plane to Brazil."