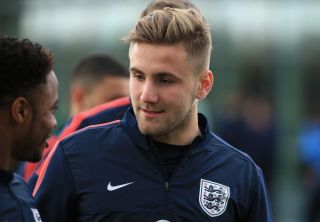 The 18-year-old has risen to prominence after breaking into Nigel Adkins's first-team plans last season, and his sustained form under Mauricio Pochettino earned him a first England cap against Denmark last week.

Leighton Baines and Ashley Cole are also vying for the left-back slot in Roy Hodgson's plans for Brazil, but Shaw has been tipped to get the nod although he is trying to ignore the speculation.

Shaw also revealed that Hodgson had told him to concentrate on his game and not let reports affect his form at St Mary's Stadium.

"I try to ignore that sort of stuff, the media attention, as obviously it is going to happen," the full-back said.

"I spoke with Roy about it and he said that ‘there is nothing you can do about it, this stuff is going to happen’.

"I am going to keep pushing myself and see what happens at the end of the season."

Shaw has made 29 appearances for Southampton during the current campaign, but is yet to register his first senior goal.