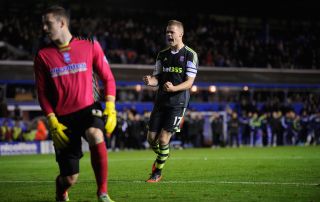 Mark Hughes' men eventually won 4-2 on penalties at St Andrew's but made hard work of their fixture against the Championship side, allowing the hosts to draw level on three occasions as extra time finished with the sides level at 4-4.

Shawcross was relieved to book a place in the quarter-finals, but insists a much-improved performance is needed if Stoke are to take anything against Southampton in the Premier League on Saturday.

"It's brilliant we're in the next round but that's the only thing we take from the game to be honest," the defender told Stoke's official website.

"It was a very disappointing performance from everyone and we need to have a good look at ourselves before Saturday to make sure we're better because that's not good enough.

"To get through to the next round is great but you've got to have the performance to match that. We should have cruised through the game but we didn't.

"We've got to be more professional, we've got to see the game out. It's a disappointing performance but ultimately we're through to the next round."

Stoke have not won in their last six Premier League games and will host a Southampton side that have lost just once away from home in the top flight all season.