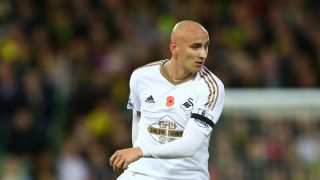 Swansea City boss Alan Curtis insists midfielder Jonjo Shelvey was not hounded out of the club prior to his £12million move to Newcastle United.

The England international, 23, claimed he had been hung out to dry after suddenly being left out of the team by his former side and felt unfairly targeted by their supporters.

But Curtis said: "I don't see how he can direct any criticism towards the club. He certainly wasn't hounded out of the club in any way.

"Obviously, there was a little bit of trouble between Jonjo and a small section of supporters but even during the [FA Cup] game last Sunday at Oxford [United - who won 3-2] a lot of the crowd were cheering his name.

"It was just a case of Jonjo wanting to play first-team football and in the end it was probably a good deal for both parties.

"The money was good and it was probably good for Jonjo to move, it was in the interest of both parties for him to have a fresh start.

"I have stated in the past, quite recently, that I wanted him to stay. He wasn't in the team, but he was always going to get an opportunity to get back and from there it would have been up to him."

Swansea continue to be linked with a host of transfer targets and Curtis revealed work on potential signings was continuing.

Asked again about a return for Jonathan de Guzman, Curtis replied: "He is a player we know and it probably makes sense to bring someone like him in.

"I have said all along we need to spruce the squad up. There is a lot going on at the moment behind the scenes."

Swansea host Watford in the Premier League on Monday, by which point they may have dropped into the bottom three depending on the results of Sunderland and Newcastle, who both sit one point behind.

Curtis added: "The most important thing is that we get back on track [after losing 4-2 against Sunderland on Wednesday]. It would be great to win the game because it would be demoralising to lose three league games in a row.

"The performances have been decent but our results have been a little disappointing. You can see the concerns of the supporters, but that is the situation we find ourselves in."