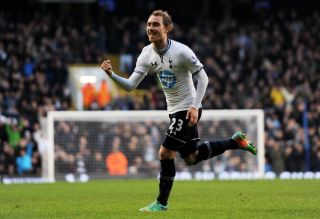 Eriksen has enjoyed an excellent first season at White Hart Lane, scoring 10 goals in 33 appearances in all competitions.

The 22-year-old Denmark international has scored four goals in his last five appearances, in addition to several assists, and his form has caused some worries for long-term admirer Sherwood.

"You are always fearful that someone might come and take one of your best players and Christian is certainly one," Sherwood said.

"I watched him at 17 years of age at Wembley for Denmark and I rang (Tottenham chairman) Daniel Levy the day after and said that he needed to sign this boy - £10 million later he is finally here, so that is all good news.

"I don't think he was available (at the time) and I think he wanted to continue his education at Ajax and that is what happened and perhaps Daniel didn't follow up on it as he does not follow-up on every player I tell him, as there are probably too many.

"He had a year left at Ajax. He has been a great acquisition for the club and they have done well to bring him in. He has just turned 22 and he has a head of a 35-year-old."

One of the reasons for Eriksen's quality is his work ethic, according to Sherwood, who compared him to Wimbledon champion Andy Murray.

"I always say to the guys, 'Andy Murray doesn't just go out there and hit cross-court winners when game day comes'," he added.

"You need to practice it as if you don't, why do you expect to do it on the big stage when the pressure is on you.

"Christian doesn't feel the pressure as it is embedded in him as he works so hard on it every day. He is married to the game and is a great guy to work with."