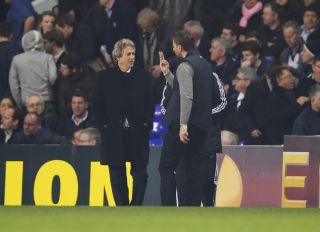 The duo had an altercation during last Thursday's UEFA Europa League last 16 first leg encounter at White Hart Lane, when Jesus appeared to display three fingers in Sherwood's direction after the Portuguese side moved into a 3-1 lead.

And, despite Jesus' assertions on Wednesday that he was unconcerned by the spat, Sherwood chose to launch a scathing attack on his opposite number ahead of the return game on Thursday.

"The club is a huge club and we've had a lot of emails from Benfica fans apologising for their manager's behaviour.

"At the end of the day, I will shake his hand, because they are a giant of a club."

Following his dispute with Jesus, Sherwood may be left hoping for a miracle as injuries look set to hamper Spurs' chances of turning the tie around.

"We are struggling," he continued. "We have a lot of injuries, unfortunately.

"We are going to have to leave a lot of bodies behind and go with a few kids.

"(Emmanuel) Adebayor will be missing, as he has a hamstring problem.

"Younes Kaboul had the fitness test before the game at Arsenal and he just managed to crawl over the line, so he won't be fit. So that's two very important players for us.

"Jan Vertonghen is obviously suspended so, in the centre-back area, we need to conjure up something.

"Paulinho is going to be struggling, he has pulled out of training (on Wednesday) with a calf problem. We are going to assess it."