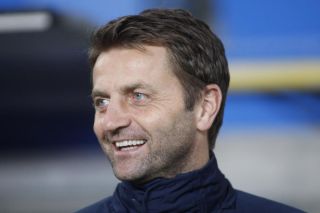 Not since February 1990 have Tottenham won at Stamford Bridge, with Gary Lineker netting the winner on that occasion.

Spurs travel to west London four points adrift of fourth-placed Manchester City as they continue to fight for a spot in next season's UEFA Champions League.

Despite history weighing heavily in favour of Premier League leaders Chelsea, Tottenham boast the best away record in the league this term.

And head coach Sherwood reckons that his charges can play with complete freedom in this weekend's showdown.

"What's happened in the past we have to put to the back of our minds," he said. "We have to go there and impose ourselves and hopefully get a positive result.

"But there's absolutely no pressure on the boys because our record there is so bad, so we can go there, take the shackles off and enjoy the day.

"The only people who expect us to win are inside our dressing room.

"We've been good away from home but obviously our recent away game was poor. We played Norwich and we got beaten. If we play anything like we did at Norwich they will be putting more bulbs in the scoreboard.

"But we need to make sure that we're a lot better than that and we will be. The motivation of the players is there, the record suggests that.

"We're going to go up there and give it everything. It's a chance for them to put themselves in the record books and we're confident that we can spring a surprise, because after all it is going to be a surprise isn't it, if we beat Chelsea at the Bridge."

Sherwood confirmed that late fitness checks will be given to defensive duo Kyle Walker and Younes Kaboul, but midfielder Christian Eriksen is unlikely to recover in time from a back problem.