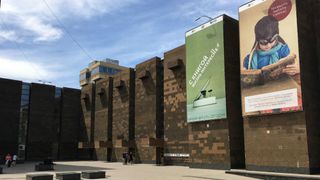 Take a slow walk up tree-lined boulevard Pushkinskaya Ulitsa in the late afternoon sun, and you will inevitably stumble across the most distinctive building in Rostov-on-Don, where a quiet mission to offer light in the darkness has found a new, international audience during the World Cup.

The Don State Public Library is a late masterpiece of modernist brutalism, built from Armenian tuff, a type of rock formed by the ash ejected from vents during volcanic eruptions.

The structure, designed in Soviet days but not finished and occupied until 1994, is intended to resemble, externally at least, books on a shelf.

Upon passing through the entrance, visitors first arrive in a relatively dark, low-ceilinged foyer, before their attention is swiftly, unavoidably drawn to a tranquil oasis in the centre of the building, where skylights three floors above bathe a tropical garden and seating area in natural illumination.

"The architect… created such a concept of a building that 'knowledge is the light', so the library building outside is very dark, from a dark stone," the Cultural Programs Centre's Polina Kasperovich told Omnisport.

"There is a reason for it… you come to the library with less knowledge than you leave.

"Passing the entrance, you come here, into the winter garden, where it is light, where there is a lot of oxygen, where you are gaining knowledge, which is 'the light'."

The distinctive exterior of Don State Library and inside, its beautiful winter garden July 1, 2018

On the day of Omnisport's visit, Kasperovich was preparing to host a meeting of the city's newly formed Icelandic cultural community organisation, inspired in part by the impact of FC Rostov's three Iceland internationals; Ragnar Sigurdsson, Sverrir Ingi Ingason and Bjorn Bergmann Sigurdarson, during what is the 75th year of formal diplomatic relations between the two countries.

Upstairs, paintings of Iceland made by a Rostov artist during her visit to the tiny Nordic nation adorned the walls, along with images of sport created by local students from a creative technical college.

But in June and July at least, it is not only locals who are benefitting from the impressive civic facility.

"The library is a calling card of the city," Kasperovic said.

"We noticed that many tourists are interested in this building, they want to know what we do.

"Even now, during the World Cup, we are visited by tourists and fans of different teams, they are interested in what is happening here. It seems to us that the library is the pride of our city.

And here's interviewing Polina Kasperovich, the Cultural Programs Centre's Head of Department about the library's history, architecture and role in civic life. July 1, 2018

"Some tourists visit the library purposefully, they knew that they would come to Rostov-on-Don and come here.

"Also, there are those tourists who were just passing by… they decided to find a lavatory and go inside, and suddenly they saw the library. They liked it and they asked [us] to tell [them] about it. We are happy to give a tour, introduce our library to them, tell about our writers and culture.

"We sincerely like that foreigners show interest in what we do. It seems to me that this is great, because I want to believe in the bright future not only of our culture, but of the world as well."

Rostov is proud of its connections to iconic writers. An English translation of Alexander Pushkin's poem 'To The Don' guided visitors off their flight and through the new Platov international airport, and a statue of the author, for whom Pushkinskaya is named, has the likeness of Anton Chekhov, born in nearby Taganrog, for a neighbour.

Aleksandr Solzhenitsyn studied mathematics at Rostov State University, while Nobel prize winner Mikhail Sholokhov's works about the lives of Don Cossacks in the Civil War and early Soviet era are treasured by the region's inhabitants.

Discovered a new mosaic yesterday.The shop vendor opposite told me that it depicts a favourite passage from Sholokhov’s And Quiet Flows The Don July 1, 2018

Understandably, it was the round ball rather than the written word taking centre stage during the World Cup, even within the library.

But don't make the mistake of thinking the beautiful game, with all its noise, colour and passion, is inherently more exciting than escaping into the rich canon of one of the world's foremost literary nations.

"There are such football games that can bore you to sleep, and there is such literature, after reading which, you cannot fall asleep," Kasperovich said.

"Everything is individual. And yet these are different kinds of leisure. One assumes that you are alone with yourself, with your world, which is built from what you read. And the other is a surge of emotions.

"Personally, for me, it all depends on what kind of book and what kind of football. But these are two components, without which a person cannot be happy.

"Once he needs to sit and read, and once go to the stadium, cheer, scream, cry and rejoice with other fans. Great! It's important for football to be beautiful."

After witnessing the impact of the World Cup in Rostov, on and off the field, few would argue with Kasperovich's nuanced, insightful assessment. You could say, it's word perfect.