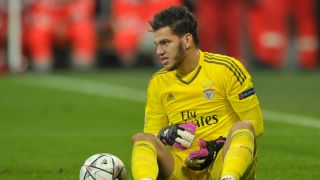 Silva's switch to the Premier League from Monaco was agreed last week, the attacking midfielder joining City for a reported fee of £43million.

City's next move in the transfer market is expected to see the club strengthen their goalkeeping ranks, with Benfica's Ederson heavily linked with Pep Guardiola's side.

Silva and Ederson came up through the ranks together at Benfica before the former left for Monaco and the Portugal international would love to play alongside his old team-mate once again.

"Is it official yet? If he comes, of course I will be very happy because I know him very well," Silva told O Jogo.

"I had the pleasure of sharing a few moments with him coming through at Benfica.

"He is a great goalkeeper. If I can play with him [again], I will be very happy."

After victory over Vitoria Guimaraes secured the double for Benfica on Sunday, Ederson told Portuguese broadcaster RTP: "This was probably my last game for Benfica".

Reports have suggested the 23-year-old has since travelled to Manchester for a medical with City.