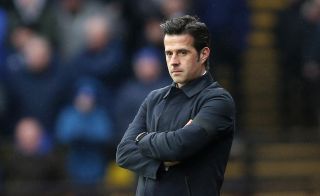 Marco Silva hinted he was disappointed at the lack of credit Everton received after a comprehensive 4-0 victory over Manchester United last weekend.

The Toffees followed up wins over Chelsea and Arsenal in recent weeks by dismantling United at Goodison Park, but much of the fallout centred on the shortcomings of Ole Gunnar Solskjaer’s side.

Silva was typically phlegmatic when asked whether he felt Everton’s achievement had been glossed over but said: “It is up to you (the media) to give the right credit and to look for both teams, not just for one.

“But I cannot change anything, it’s not my job.

“I don’t know if (the win over United) was the best (performance of the season) or not, it was one of the best.

“We did really well, we performed well, we were clinical and assertive in the last third and in important moments of the match.”

Richarlison started the rout last Sunday with a magnificent acrobatic overhead kick but was later withdrawn, clutching his left side as he went off minutes after half-time.

Silva revealed Richarlison is a “major doubt” to face Crystal Palace on Saturday afternoon while Theo Walcott, the Brazilian striker’s replacement against United and who completed the scoring, is struggling with sickness.

However, Lucas Digne, another on the scoresheet last weekend, has recovered from a knock he suffered which forced his late withdrawal while Yerry Mina has resumed full training.

Speaking at his press conference – broadcast on Everton’s website – to preview the trip to Palace, Silva added: “Lucas is OK but Richarlison is a major doubt for us.

“He tried yesterday (Wednesday) to work with us and again today. We will see how he reacts tomorrow.

“Theo was sick this morning, so we will also see how he reacts.

“Yerry Mina started training with the team at the beginning of the week and is doing well.”