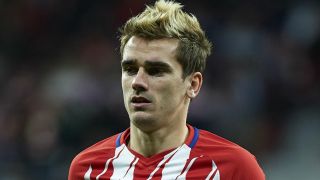 Diego Simeone has no qualms over Antoine Griezmann's dedication to Atletico Madrid despite the player being at the centre of a tug-of-war with Barcelona.

Atleti lodged a complaint to FIFA this week over their LaLiga rivals' alleged pursuit of the France star.

However, Simeone insists the 26-year-old's state of mind has not been affected by the speculation surrounding his future.

"The board is managing it in the best way, looking for what is best for the club," Simeone told reporters ahead of Friday's trip to Espanyol.

"I am very happy with Antoine. I base my thoughts on what I see and I see that he is very involved and committed.

"Because of his [hamstring] injury, he faced [Deportivo] Alaves the other day without being 100 per cent.

"He is doing well with his team-mates and he is a fundamental player for us. These are all positives.

"I trust Griezmann and I believe in him. The best is yet to come."

| PRESS CONFERENCE: " have great players from the midfield up."December 21, 2017

Atleti could close to within three points of leaders Barca by winning a fifth successive LaLiga match against Espanyol.

And while victory would ramp up the pressure on Ernesto Valverde's side ahead of El Clasico, Simeone is not prepared to consider his team as title contenders.

"It is too early to talk. Everything is changing," he said.

"Reality is the only thing that counts and that means doing well against Espanyol tomorrow."