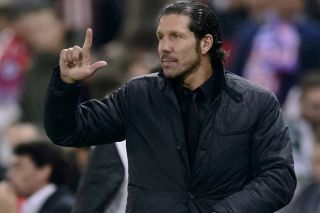 A David Villa brace and goals from Oliver Torres, Diego Costa and Gabi saw Atletico to see the convincing win at the Estadio Vicente Calderon on Sunday.

Simeone said his side slowed down after opening the scoring early on, but was delighted with how they performed as the encounter went on.

"We started very well and we found very soon the goal. The goal made us decrease our intensity and our capacity to combine," he said.

"Then, from the 30th minute in the first half, we started again to perform better.

"The second half was completely another story. The team went to the pitch with a lot of decisions and we found the roads to the goals with a very interesting way of playing.

"I think we had a brilliant performance."

It was Villa's first goal in any competition since September 14 after the former Barcelona forward had made a solid start at his new club.

"Villa found in the second (half) his habitat – the goal," Simeone said.

"It is normal that such a great player needs to return to score. We need Villa's best version as the others' best version. "